Notes for this series:

Hoping to put down some information in case any people would be interested in what I experienced and learned on my Weightlifting training camp to China. I stayed at BSU, one of many “factories” that produce top class weightlifters (Zhang Guozheng was one of the more famous lifters out ofBSU.) I was training under Coach Ma (From theLindenwood lions website): 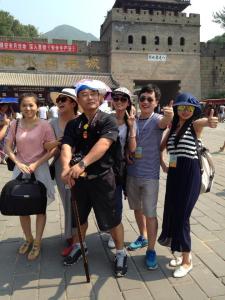 “Ma was a member of the Chinese National Team from 1978 to 1988 and represented his country at the 1984 Los Angeles Olympic Games.  He also won a silver medal and two bronze medals while competing in four World Championships and World Cups. Since competing, Ma has been a coach at a variety of levels for over 23 years, beginning as a Provincial and national Level Coach certified in China.  More recently, he was the head coach of the Seychelles (Africa) National Team and the USA World University National Team from 2003 to 2007.  Ma received an undergraduate degree from Anhui University in China in 1989 and received his master’s degree in exercise science from Xi’an Sports University in China in 2007.”

He was an engaging individual, with a tremendous amount of energy.  He was trying his absolute to ensure everyone learned as much as possible. I am grateful for all his help on the trip.

I have a lot of notes from my trip to China (so will put out a couple of blog posts to try to sort my thoughts, might be a little scattered as there were so many lectures and things to learn so it’s hard to put it down in a well thought out pattern.

I appreciated the honesty of the coaches when it came to how the system was developed. They stole from America in the 50s, Russia in the 70s and Bulgaria in the 80s from there they evolved their own unique style, which they view as the best. They have 10 exercises that they class as “technique” lifts and 10 exercises for “strength”.

These exercises were supposed to fall into certain ratios for the athlete to make sure that he is not lacking in some area that is costing him potential weight on the bar, for example if your military press is 70kg and you jerk 160, odds are your legs are far stronger than your arms and you need to address that weakness.

As you would expect life gets hard fast for the budding Chinese weightlifter, it is expected that athletes turn professional at 16. The average workload is about 12 sessions per week. Mon/Wed/Friday [Tues/Thur/Sat]x2 and some morning exercises on some days that incorporate stretching techniques and small muscle training, there isn’t a stone left unturned for a lot of these athletes. Not an ounce of fat is to be found, they also train in high heat without air conditioning to help with flexibility and weight loss (little brosciencey). Any number of bodybuilding exercises are also included in the program, they do not count to the weekly volume for calculations. On average it takes 8-10 years to produce a male Olympic Champion and 5-8 years to produce a female Olympic Champion.

In the beginner stage they spend about 60/40 split between technique and strength exercises, intermediate stage they spend about 50/50 between the exercises whilst the advanced lifters lift 40/60. As the sport mastery increases, less time is spent doing the full lifts and more time is spent getting stronger. To them, beginner level is pretty much every Athlete until the start winning National competitions.

The key value in training is intensity, as much time as possible is spent doing as heavy weights as technique allows. By this age, the technique should be second nature and entirely feed forward. The athletes tend to max out on Friday (Big Friday is the Weightlifter equivalent to Chest Mondays). Weights up to 80% are not counted towards weekly volume. The lighter weight classes are expected to do more work than the heavier classes. The limiting factor being the connective tissue of the bigger athletes. They termed them as fragile.

When it comes to program design, the first questions the coach asks are

Every day tends to have a focus, unlike some designs that does both the classic lifts. So one day might be Power clean + push press, clean fast pull and clean deadlift. This way the athlete should be able to refine the motor pattern more effectively, this is particularly useful for athletes whose technique is sub par. The coaches are there to make sure the accessory lifts are approached in the same way as the lifts, people ducking out of pulls / squats are weeded out.

The programs also include a lot of conditioning, commonplace for the athletes to have long distance runs + sprints in the morning all throughout career. As the athlete nears retirement, the program adapts to suit them. The example used was that Lu Xiaojun has recently become a father and so his training has completely changed. Something like basketball or football is played once a week as a change of stimulus. Every athlete is expected to manage their own program in order to increase its effectiveness. No coach can know an athlete better than himself. The yearly intensity is set to peak around 2/3 competitions a year. They favour the Olympics and Asian games above all else. The World Championships are low on the priorities (despite the strong showing this year).

For the top dogs no expense is spared. They are training at the largest and best equipped Weightlifting gym in the world (The NTC). It is jaw dropping in person, with a session in full flow the energy of the building is palpable. Coach Yu Jie mentioned that coaches are viewed as remote controllers and the athletes are National treasures. Anything that would improve the athlete he/she gets. All athletes have their own massage therapist and sports psychology coach (who stays with the athletes to get to know them better). They live on site and have access to a Cyro room, swimming pool, sauna and ice baths. Recovery was something that is drilled into the athletes from the ground up, by this point it is second nature.

The step up in class to the National level is very evident even during simple things like the group warm ups. Compared to the Professional athletes at BSU they are leaner and a lot more flexible. At this point the little things matter an awful lot more. I was gobsmacked when Liao Hui dropped into a pancake stretch with his chest on the ground whilst texting just after walking into the Asian games trials. (He proceeded to lift 165/200, opening on 200kg. Real time lift starts at 1:20).

The psychology differences between the genders was quite evident as well. The men missing a lot more lifts than the females and also joking when missing / recovering a jerk, shouting “light weight”, “my shitty technique” or “easy”.

Athlete identification is the number one priority for the Chinese weightlifting system. With a nation as large as China if they get that right it seems to be half the battle. To get an idea of the wealth of resources available every district in Beijing (16 districts) has at least 1 professional team, each team contains 20 males and 20 females who are full-time weightlifters.

Kids are compared against the usual metrics that determines their potential: vertical, broad jump, motor control in other sports and sprint speed. Coach Ma also made the comment that recruiters look for woman with mustaches and children with bigger balls which raised a few laughs. It was mentioned however that times have moved on and they test the young athletes’ hormone levels now.

Coach Yu Jie (Liao/Lu’s coach) mentioned that above all the athlete’s attitude was the determining factor.  A common practise is to make the youngsters run 2k races to see which athletes start to flag and give up and which ones keep driving on. When you have the kid with the right genetic makeup and the right attitude, you have yourself a future star. More and more they are looking to country boys, since city life is too comfortable to breed champions. A sentiment echoed by the demise of American boxing. Lu Xiaojun is a farmer for instance.

A coach who specifically works with young athletes hosted a QNA and in it he mentioned how important it was to learn the technique early on and staying away from pushing strength too fast. It is viewed as the final piece of the puzzle. Most work is done with sub 60%. (As an older athlete however this would change in priority, risks must be taken). If the athlete learns in the formative years (10-14) it is expected to have great technique in 3 months. (This made me a little sad inside). There have been a few examples of athletes learning later, they usually come from other sports like gymnastics.

This coach also mentioned how important it is to encourage and motivate the younger athletes until they develop that internal drive. Constantly using examples of famous weightlifters who have been in the same place that they were facing the same struggles.

The 10-14yr old athletes train for 6 days a week for 3 hours a day it is expected to take 2 months to adapt to this lifestyle. Whilst the athlete trains at the facility, he is cared for by the state, the family is allowed to send a little extra money if they have it to spare.

For youth level competitions, it is more important to make lifts than the weight on the bar. 6/6 is very encouraging for junior athletes, this leads to a culture of success.

For the male athletes, a higher training intensity is required for progress. They tend to have short rests in between sets and more training sessions. Some personality encourage a daily max. It was described as men being “easily excited” and “quick to fatigue”, whereas woman take longer to get going. Program design is a little more fluid than some other nations. More focus is placed on feeling the weight rather than number crunching. The typical cycle is modelled around 2 weeks at a high intensity and then 3-4 days at a lighter intensity for recovery.

Female athletes tend to operate at a marked higher volume and taking longer rests in between sets. They operate at a working intensity for longer but require a longer recovery period. Typically 3 weeks at high intensity and then 1 week to 10 days on a recovery block. Higher level female athletes also tend to handle one long training session better than the men so program design reflects this.

Mentally men are less susceptible to misses compared to woman, they believe that woman need to build a lot more confidence in the lifts. Compared to the men the woman do more bar work at the end of sessions.

Men tend to focus more on absolute strength at the higher levels, woman spend more time on technique and speed strength. Also the female athlete tends to have stronger legs in proportion to the rest of their body so they need to spend an awful lot of time on bodybuilding work. Paying particular attention to overhead strength. Recovery blocks for both genders tend to be in the 70-80% range and be much shorter sessions.

We were given samples of training programs from both the BSU team and from National level athletes. I don’t think it is really applicable to write a program on a website when you have no idea where you fit into the system. Everything is highly particular to that athlete. Also this is just my short insight into the Chinese model. It is something that I intend to go back to once my Mandarin improves.

*I will probably edit this at some point, just wanted to clear some notes out*